Before a million pails of cold water brought the disease to global attention, many people had never heard of Amyotrophic Lateral Sclerosis, or #ALS…!!

But after a summer of ice bucket challenges, the devastating motor neuron disorder now has an astonishing level of awareness…Though the campaign didn’t originate as a deliberate marketing strategy, it’s a great case study of the power of guerrilla marketing in the social-media age.

Inexpensive, small scale and non-traditional marketing tactics can be extremely effective ways of promoting your brand if the idea catches the public imagination and goes viral. But so-called “Guerrilla Marketing” covers a huge variety of activities, from PR stunts to viral videos…

To determine if there’s a tactic that will work for your business, consider these five tips for crafting an effective Guerrilla-Marketing campaign that will resonate with your target audience… 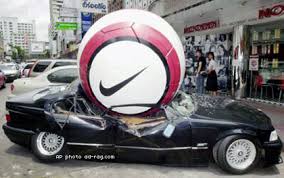 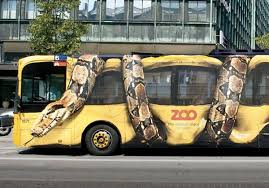 If your product or service is something people don’t ordinarily care about, you need to give it an attention-grabbing hook, like the ALS ice bucket challenge.

Or try connecting with people in unexpected ways, like this fitness company ad that appeared on German subway trains showing a man hanging out to a weight, rather than a subway railing…

Controversy sells so if you’re willing to break taboos and speak truths that people usually prefer to ignore, you can turn heads. This is a common tactic for charities and non-profits, like the visually arresting ketchup packs created by Campaign Against Landmines. The packets say, “In 89 countries walking on a mine is still routine” and on the flipside is a pair of legs…When someone opens up the ketchup packets, it depicts blood on the legs…

My company Hightail has indulged in the occasional provocative but fun stunt. We once handed out free cronuts to attendees at a competitor’s annual conference….The pastry packaging came with step-by-step instructions, including “Discard Box”. It was a playful and controversial (we were kicked out of the venue) way of targeting a very specific audience..

As a startup, your passion for what you do and vision for changing the world is incredibly powerful. Stating that vision boldly and selling your product based on emotional appeal, not rational argument can give you an advantage.

Salesforce did this brilliantly with its “No Software” logo that evangelized the company’s underlying vision of simple, inexpensive, cloud-based services rather than focusing on what its product actually does. I still remember Marc Benioff’s ad in which a fighter jet shoots down a biplane. Though it was a little cheesy, the image represented a powerful idea that ultimately lived up to the analogy.

Also, you don’t have to be starting out to harness the power of ideas. IKEA celebrated the 30th anniversary of its popular Billy bookcase by filling 30 of them with books and placing them on Bondi Beach in Australia…Beach goers could swap a book for one of their own or donate to a literacy charity. By focusing on the popular beach pastime of reading, the furniture company got people’s attention while still promoting its product..

Physical manifestations are great guerrilla marketing. Translating your idea into an object or event can help explain a product, especially digital services…

A Westfield shopping mall in California installed a real-life Pinterest board to act as an interactive store directory. Though Pinterest didn’t initiate the idea, by approving the use of its logo, the company got agreat real-life demonstration of its online service.

Even better, if you can capture your physical-world tactic and share it online, you can get a viral multiplier.  Adobe cleverly achieved this with a bus stop prank in which they Photo-shopped waiting passengers into a fake digital movie poster, as a way to advertise its Adobe Creative Day. The “candid camera” appeal of this stunt has garnered more than 22 million views on YouTube..

Some of the best ideas sound unbelievably dumb on paper (and may still, in fact, be dumb when you actually do them). They may flop, but you won’t know until you try. Many guerrilla campaigns get attention precisely because they are unusual, outrageous or unconventional. So don’t worry about people laughing at you.

For instance, ride-sharing service Uber has promoted its service by delivering ice cream or puppies to customers. In December 2013, Canadian airline WestJet asked passengers boarding a flight to Calgary what they wanted for Christmas then delivered these gifts when they landed.

Whichever style of #GuerrillaMarketingCampaign, you devise, remember to document and publish everything…Most #GuerrillaMarketing, is by its nature small in scale but it’s the shared links, laughs and likes that will make your campaign a big success…!!

Social feeds from across the country are chock-full of videos and photos of Celebrities, Inventors, CEOs, Athletes and Politicians all taking part in the most recent viral sensation : “the Ice Bucket Challenge”…!!

Whether you’ve laughed at your friend’s reaction to the ice cold water or taken the challenge yourself, postings about it are everywhere. This initiative has achieved something that’s every marketer’s dream: going viral and capturing wide attention across the nation in a month or two..

How did this simple initiative turn into a movement that has scored participation from some of the biggest names in the country, including Bill Gates, Sheryl Sandberg, Mark Zuckerberg, Kobe Bryant, Oprah and New Jersey Gov. Chris Christie ??

The #IceBucketChallenge, benefits the ALS Association, which is dedicated to raising funds to research a cure for amyotrophic lateral sclerosis as well as caring for those with the disease. It gained steam with the participation of Beverly, Mass.-based Pete Frates, who since 2012 has had the illness (also called Lou Gehrig’s disease)...

#StartUps, established firms and marketers of all types can learn from the success of the Ice Bucket Challenge…Those trying to develop a viral campaign can take the following steps :

1. Identify the Goal OR Cause :

The goal of the Ice Bucket Challenge has been to spread awareness and raise funds for #ALSResearch, and its success has exceeded initial expectations. The objective is simple and clear and the challenge doesn’t require much effort from participants: going online to donate or pouring a bucket of ice water over the head, or both.

Today’s consumers like simplicity and direct messaging. They typically won’t take the time to read through an entire article, newsletter or web page to understand a message. Marketers, simplicity is your friend…

Few things are funnier than seeing people have ice poured all over them and watching them cringe, scream or freeze in place. The web has been flooded with comical videos and images of those who have accepted the challenge.

People like to laugh, so keep members of your audience entertained with a video or photo that they would enjoy viewing. Keeping things lighthearted lets people connect with an organization on a human level and can encourage further engagement in an authentic way…

Those asked to take the ALS Ice Bucket Challenge have only 24 hours to do so…If you want an idea to flourish, keep the window of time brief to propel the process forward rapidly…By giving your audience a deadline, the initiative will become a greater priority.

4. Understand the power of Multiplication :

The ALS challenge calls on participants to encourage three additional people to participate, thus creating a multiplier effect…When possible, let consumers involved in an initiative have a chance to engage with their network so as to experience the joy of others joining in. The bonus for a marketer is bringing increased exposure to a company’s brand..

If you’re hoping for an idea or campaign to go viral, make it easy for others to share updates across multiple platforms. Don’t give people a reason to not become involved..

6. Give Participants a Chance to feel Good :

Everyone loves to feel a little better about himself (or herself). The Ice Bucket Challenge raises funds for a medical cause, and no matter the size of a donation, participants can feel good because they’re helping others in need.

Plus, the challenge gives participants a sense of unity : They are sharing positive feelings and a goal with the rich and famous…!!

Setting up an initiative like this lets participants also allows for an emotional connection with an organization and opens up an opportunity for conversation…!!